Space exploration and research usually calls to mind images of weightlessness and advanced technologies. But a great deal of engineering takes place right here on Earth, on the ground. Due to the high cost of failure in space and the inherent danger involved, NASA performs exhaustive tests and simulations of all systems and system interactions on Earth long before they are given a chance to operate in space. And robotic systems and software tools from Leica Geosystems (www.leica-geosystems.com) have proven invaluable to the space agency in these simulations.

NASA’s Marshall Space Flight Center (MSFC, www.msfc.nasa.gov) in Huntsville, AL is one of the Space Agency’s largest and most diversified installations. It has been a key contributor to numerous significant NASA programs during the Space Agency's more than 45-year history—from the 1961 flight of the first United States’ astronaut into space, to the Apollo missions exploring the Moon, to development and operation of America's Space Shuttle fleet, and construction of and scientific discovery aboard the International Space Station.

Engineers and scientists at the Marshall Center use state-of-the-art equipment and facilities to accomplish NASA's mission. For years, NASA has used robots to simulate different aspects of docking and space maneuvering. In the past, the robots were checked with static measurements. NASA began to search for an effective method to inspect the dynamic response of their robotic systems. The vastness of the testbed, the constriction of available space surrounding the robots, and the need for tremendous freedom of movement were among the myriad of special considerations and limitations that would be placed on a metrology system to accomplish this inspection project.

NASA contacted Leica Geosystems with a request for an off-the-shelf solution that would require few, if any, modifications to complete the complex measurement task remotely, with no personnel present inside the facility. At the Marshall Center, robots in the Flight Robotics Laboratory (FRL) and the Contact Dynamics Simulation Lab (CDSL) make up the MSFC integrated testbed. NASA wanted to verify the robotics using dynamic measurements with six degrees of freedom to determine how accurately the robots respond to commanded moves.

A typical berthing or docking mechanism is composed of two mating components, one for each vehicle. In the CDSL, one component of a docking mechanism is attached to a motion-base, while the other component is mounted to a force and torque sensor fixed in the support structure above the motion-base. The motion system is driven by six hydraulic legs controlled by a 12-processor Silicon Graphics Challenge computer operating on an IRIX platform. The facility has full six degrees of freedom motion over a large operating space with 20,000-lb (9,800-kg) payload capability.

The FRL is centered on a 44 by 86 ft (13.5 by 26 m) precision air bearing floor, the largest of its kind in the world. A mobility base called the Air Bearing Spacecraft Simulator (ABSS) is used on the air-bearing floor and is capable of 3DoF of actual motion and 3DoF of simulated motion, and holds a 400-lb (180-kg) payload. An 8DoF overhead gantry, called the Dynamic Overhead Target Simulator (DOTS), provides a 1000-lb (454-kg) payload capability for simulating relative motion with respect to a fixed target on the facility floor. A computer system provides inverse kinematics and allows the gantry to act as a target or as the six-degrees-of-freedom rendezvous vehicle. The target reaction dynamics are simulated through force/torque feedback from sensors mounted at the payload interface. 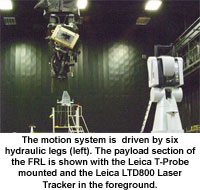 Leica's LTD800 laser tracker with a Leica T-Cam and a Leica T-Probe were used to capture measurements without any special modifications (Fig. 1). This arrangement provided the measurement capability for XYZ (three-dimensional) coordinates along with rotation angles for full six degrees of freedom information for the position of the Leica T-Probe, which was used without a stylus. 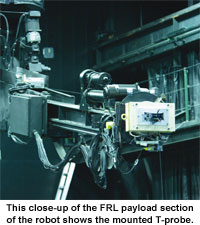 The Leica T-Probe was mounted on the adaptor plate, which was bolted onto a special fabricated bracket on the CDSL (Fig. 2). This bracket was mounted onto a frame extension of the platform. The resulting arrangement positioned the T-Probe on the edge of the platform pointed down at the LTD800 tracker. This position allowed the platform to make a full range of movement in all six degrees of freedom. Leica T-Probe’s freedom-to-rotate acceptance angle of a full 360 deg. in roll, and ±45 deg. in pitch and yaw yields an acceptable angle between the T-Probe and the T-Cam, placing few limitations on the movement of the robot itself.

Leica Axyz, a well-established and easy-to-use menu-driven measurement and analysis software package, was used to create the initial coordinate system for the two robots and to establish reference values on both the payload section targets and the floor monuments. The Axyz software was selected due to its many geometry and alignment routines that provide flexibility to analyze the geometry of the robots and establish coordinates for new monuments and reference targets.

The emScon Base User Interface (BUI) is a web-based application with an Internet Explorer-based user interface. The emScon BUI performs system checks, set environment parameters, and set up the T-Probe conditions. Most laser tracker functions can be accessed by the emScon BUI.

The rich set of emScon commands allowed special programs to be created very quickly to handle a wide variety of diverse applications. Two special applications involving data transformation and data collection were developed to accomplish the required tasks, illustrating the ease and simplicity of emScon programming.

The data collection program was a Visual Basic application that simply turned on the triggered measurement mode of measurement and stored the measurements in a file. The emScon interface accomplished most of the work.

There was no limit on the operation of the CDSL as the maximum movements of this robot did not exceed any capability of the Leica T-Probe to measure, nor the Leica Laser Tracker's ability to follow the movement. The Leica T-Probe is the only system whose operational range is large enough for this application. Due to the enormous size of the FRL robot, the set of measurements was split into two parts. Despite the vast size of the robot, the entire set of measurements was accomplished with just one repositioning of the Leica laser tracker, which was a one-person operation.

The CDSL robot is located in a room with a very limited area to establish a reference coordinate system. The robot fills most of the space in the room and a high percentage of the floor was covered with lift-off access panels. Over the course of five days, 150 measurement files were created and a file would contain anywhere from a few hundred measurements to over 200,000 points. For safety reasons, all of the measurements were performed remotely, with no personnel in the room with the robot.

The FRL room was very large and required two setups to measure the range of the robot. Over the course of 11 days, 225 measurement files were created during the measurement project.

The Leica LTD800 laser tracker and wireless T-Probe technology provided the unique ability to measure a trajectory with six degrees of freedom synchronized with a trigger pulse. This powerful metrology solution enabled NASA to synchronize the expected position of the robots' payload section with the measured location with a full six degrees of freedom. Leica's state-of-the-art portable CMM system imposed few limitations of its own on the NASA MSFC facility and delivered high precision measurement data while meeting NASA's very tight schedule. The Marshall Space Flight Center currently owns one Leica LTD800 Laser Tracker, a Leica T-Cam,  and Leica T-Probe.