STXI Motion is a global engineering company that designs and produces motion control and servo solutions. Our mission is to enable machine builders to focus on their core business by offering unmatched service, support, and systems in the field of industrial automation. STXI provides dedicated R&D to develop technologies and products paired with complementary solutions, that deliver optimized motion systems under a trusted brand and single ownership.

The MCM is a brushless digital servo drive supporting CANopen®. Originally designed for a specific application in the medical industry.

This product complies with the medical EMI standard IEC 60601-1-Rev 3.

The module has replaced six separate components, fitting them in a single cost and space efficient module with a single product number for all its axes. 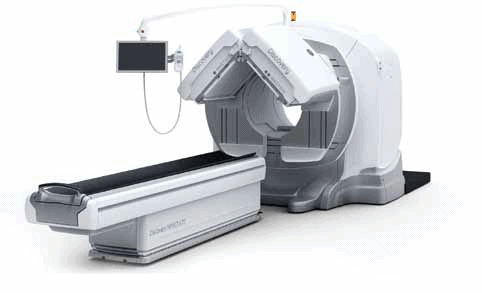 GE Healthcare was looking to develop the next generation of their Discovery 600 Series. In order to increase thelifetime of their parts, they wanted to move from brush-based technology to the more durable yet harder to control brushless technology. In addition, GE wanted to reduce their production costs, increase the accuracy and smooth operation of the system, and reduce the footprint of the control systems.

As a medical device company, GE needed a solution that would conform to strict medical EMC standards.

We selected among several vendors due to its extensive experience and expertise in developing customized servo drives and motion solutions, the availability of a suitable platform with an extensive array of building blocks, its ability to offer innovative engineering that would dramatically reduce GE’s production costs, and its ability to provide intensive support throughout the lifecycle of the product.

In the previous version, GE had six separate functions in separate cards, including tilt sensors, lters, EMC, and GE Safety communication channel.
As the application was predicted to be relatively noisy, GE needed to include a set of filters. In previous versions, these filters were dispersed across the system as separate components. Servotronix consolidated all the components into a single all-in-one motion control module with a single part number.
Each module was designed to be compatible with all the system’s axes, including all the axes for the detectors and the patient’s table. By combining all the cards into a relatively low cost module, GE reduced the overall cost of the system, simplified the system operation and maintenance, while at the same time enhancing the available functionality for each axis.

For enhanced control, the module connects two encoders to a single axis - a preliminary feedback control is connected to the motor, while a secondary feedback control monitors the load. On every power up, MCM sends the absolute position of each axis to the host controller for collision protection to allow smooth operation and prevent any axis backlash, by reading dual feedback as shown in the diagram below.