While robotic assembly applications have increased in both number and complexity over the years, a large number of applications have been passed over due to technology. When smart camera machine vision teams with industrial robots, however, the realm of possibility rapidly expands.

That’s what Ryan Berman, president of Matrix Design Inc., an Elgin, Ill.-based automation integrator, learned when he used a smart camera machine vision system from DVT in creating a multi-robot cell to manufacture and assemble bearing blocks for Peer Inc., a Waukegan, Ill.-based manufacturer of bearings. The bearing blocks are mainly used in gear pumps for off-road construction and agricultural equipment.

The machining and assembly processes, while complicated, can be broken down into several tasks. Initially, a pallet of bearing block slugs is introduced via a custom-designed gravity roller conveyer. The slugs are bored and have the top face fly-cut during the first machining process. Each of two Fanuc M-16iB machine tending robots then transfers parts to a middle assembly cell where a Fanuc LR Mate 200iB assembly robot picks two self-lubricating bearings, and, using a DVT Legend 530 machine vision system, aligns them to a specific angle.

A press, controlled by an Allen-Bradley PLC, then presses the bearings into the bearing block. Once completed, the assembly robot transfers the bearing block back into the machining cell from which it came for a deburring operation and then the final machining operation. Once the part has been finish machined, it is deburred a final time and then transferred to a Coordinate Measuring Machine (CMM) that inspects several different parts with accuracy better than .0001’‘. Reports of these inspections go back to the machine so it can make auto-corrections.

‘‘Depending on the timing, the robot has to work almost asynchronously,’‘ said Matrix Controls Engineer Mike George. ‘‘We have to go from the pivot conveyer to the machine, from the machine to the debur, from the debur to the transfer conveyer, back to the machine, to the measuring machine and then back out. All of these processes don’t really go in a sequence as much as when a part is ready. When something is ready, the robot will do that operation,’‘ he said. 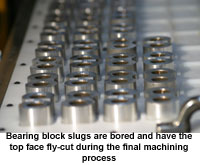 While the manufacture of the bearing block is relatively straightforward from a robotic load/unload standpoint, the bearing block assembly process presented the greater challenge. Matrix was required to orient two of the customer’s self-lubricated bearings for insertion into the semi-machined bearing block. Each bearing needed to be rotationally positioned with an accuracy of about one degree, and the angle of orientation could be different depending upon which part was produced.

‘‘Without machine vision, I don’t think they could have done this,’‘ Berman said. ‘‘Due to the large variation of customer parts, and the fact that the customer wants to be able to produce all of these parts in the same robotic cell, any sort of mechanical orientation solution would have been cost-prohibitive.’‘

Matrix used the DVT camera along with a dark field light to successfully direct the robot to rotate the bearing properly. After the bearing has been oriented by the robot, the camera is directed to make an inspection to ensure the orientation feature is within the required one degree, thus giving double assurance.

The robots are tied together via an Allen-Bradley CompactLogix PLC. Allen-Bradley Device Net is used along with Ethernet communications for the DVT camera and other components.

The bearing block assembly is a complex process that required hard work and innovation from Matrix Design engineers. One area that was especially critical was the pressing process operation where the self-lubricated bearings are pressed into the bearing blocks. The customer was concerned that the pressing operation could, if not properly controlled, scallop material from the bearing block and lead to product failure. To address this concern, Matrix designed a custom press from the ground up and created a die set concept that would be precise and robust enough to handle all of the customer’s parts. To precisely control press force, each press is equipped with a proportional pressure controller and electronic pressure regulator. With the addition of an Allen-Bradley PanelView 600, press force can be changed with the touch of a button and is programmable from 0-6800 lbs.

As the robotic cell took shape, Matrix was not afraid to rethink the cell design. As an example, the original cell controller concept was replaced with a Dell PC and an industrial touch-screen LCD panel. With the addition of an 8-port Ethernet hub, the communication and monitoring possibilities dramatically expanded.

Aware that this was the customer’s first robotic cell and the learning curve would be a long and steep one, Matrix set a goal to service the cell remotely. By tying the robots, camera, and PLC together via Ethernet, Matrix service personnel can now monitor the cell via remote diagnostics.

The Matrix robotic assembly cell proves that machine vision and industrial robots make a powerful team capable of handling even the most challenging of applications—a team that expands what is possible in the world of automation.