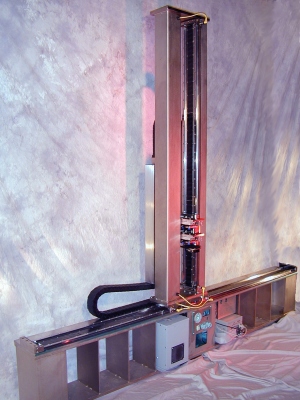 A major disk drive manufacturer needed a robot to load and unload a large vertical array of Servo Track Writers (STW's) plus an input and output shuttle within a Class 100 mini-environment.  With only a few inches of space for mechanism beyond the travel envelope, the robot was required to move 90" in the X-direction, 60" in the Z-direction, and 8" in the Y-direction.  In addition to the Class 100 requirement, it had to be ESD safe.

Analysis revealed that because of the required cycle time, even the largest diameter and highest lead ballscrew-driven actuators would not work due to critical speed limitations.

A custom-engineered three-axis robot was designed and built by MEKAnize Robots using linear motors for the X and Z-axes.  In addition to their high-speed capability, linear motors are inherently clean devices since the bearings are the only point of contact.

When using a linear motor in a vertical direction, a counterweight is typically employed to hold the load in the event of a power failure.  A counterweight cable and pulley system was viewed as unnecessarily complex and a potential particle generator -- highly undesirable in a cleanroom.  To avoid this problem, a fail-safe, self-energizing brake was engineered for the Z-axis (patent pending) that was small enough to fit in the few inches of space available.

A short cycle time was critical in order to meet the customer's production requirements.  Dual Y-actuators/end effectors were used to save time by inserting a new drive into a STW and removing the completed drive all in one step.

Mounting the robot controller external to the mini-environment was not an option.  Due to the limited space available inside the mini-environment, the open architecture PC controller designed by MEKAnize was engineered to fit under the X-axis, and the servo controller with amplifiers was mounted on the Z-Axis.  The control code and Graphical User Interface (GUI) were written in Visual C++.  Programming in a non-proprietary language makes future program modifications easier.

In addition to controlling the robot, the MEKAnize controller acts as a network communications server for all of the STW's, relaying Factory Information System (FIS) data to them.  It also tracks the status of each hard drive.  In the event of a drive write failure, the robot will either reload the drive into a different STW or reject it, depending on the failure mode.

The STW's are mounted on rubber isolators.  To compensate for STW drift, custom-designed targets are mounted on each STW and the robot is equipped with a laser distance sensor.  The laser and target combination provides a measurement of STW position in X, Y and Z.  If the STW position is out of tolerance, the robot executes an automatic hunt routine to find the target.  Once found, the target position is automatically updated in the software.

The initial prototype has been installed and is running successfully.  Manufacturing of production units is now underway.