For over 30 years, Allied Vision has been helping people to see the bigger picture. Allied Vision supplies camera technology and image capture solutions for industrial inspection, science, medicine, traffic monitoring and many more application areas in digital imaging. With a deep understanding of customers’ needs, Allied Vision finds individual solutions for every application, a practice which has made Allied Vision one of the leading camera manufacturers worldwide in the machine vision market. 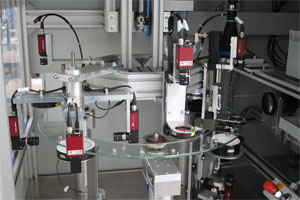 In industries such as the automotive or aerospace industry, even the smallest manufacturing flaw can stop production, generating costs in millions of dollars. This is one reason why these industries put extremely high quality requirements on their suppliers, often expecting proven 0 ppm (zero defect parts out of one million). The only way for suppliers to guarantee such a high level of quality is to perform a 100% inspection of the parts before delivery. A task that only a smart image processing system can achieve in an economical way.

GEFRA GmbH of Germany has gained a worldwide reputation as a leading provider of inspection systems. The majority of GEFRA customers are suppliers of the major automotive sub-contractors and the aerospace industry. "Variants of our Optisort series are in use in many countries around the globe and ensure that the inspected fasteners reliably meet requirements", says Thomas Rothweiler, founder and managing partner of the company proudly. "Our equipment must therefore meet the highest demands in terms of reliability", underlines Rothweiler. 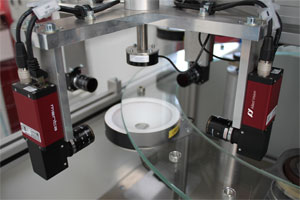 The majority of objects inspected with GEFRA Optisort units are metal components in the so-called fastener sector, such as screws, nuts or disks. Plastic components, release pins for airbags or a selection of sealing caps are also checked for geometric and surface characteristics by the company's automated machines.

This wide variety also has its perils as Rothweiler explains: "Every new part to be tested is always accompanied by certain challenges. This starts with the feeding technique, continues with automated handling and ends with the changing demands for machine vision, a key element in all our inspection processes."

According to Rothweiler, the injection gates often present a problem with injection molded components, as they can vary considerably in terms of geometry. "Such effects can turn into a real challenge for material flow and optical inspection", says the GEFRA founder. "Reliable detection of scratches or coating faults, i.e. on metal disks, is usually not easy to accomplish at the speeds required." 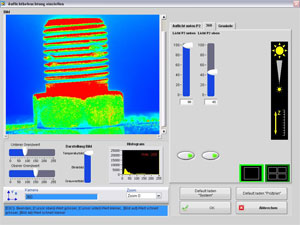 Modular cameras for modular machines
Due to the variety of parts and materials to be inspected, GEFRA has hardly built two or more identical machines over the past 15 years. Nonetheless, Rothweiler does not regard the Optisort units as being bespoke machines, largely due to an intelligent modular system which has proven itself over the years. "Our machine concept is based on standard modules for all partial functions. This applies both to the mechanical elements, in other words, all elements dealing with feeding and handling the objects to be inspected, but also the PC components and the inspection software employed."

An essential part of the company's know-how is devoted to this area: "Over the time we have developed a multifaceted building block system comprising roughly 150 tools, which are used depending on the task in hand and, for example, allow inspection of the objects at different heights and diameters. Due to our many years of experience, we are well able to assess which software tools are suitable for which components and for the detection of which faults."

Rothweiler and his engineers also base their imaging hardware requirements on standard components, most of which have for years been obtained from STEMMER IMAGING. "For us it is important to have good suppliers in all areas who we can rely on. In terms of imaging we have been working together with STEMMER IMAGING for years, a cooperation with many positive experiences. Their product portfolio covers all the components we require for our equipment." At the heart of the imaging solutions are digital cameras from Allied Vision. Thanks to their modular design, a large range of hardware variants are available – for example angled head, optical filters or various lens mount options. That way, the camera can easily adapt to the application’s requirements rather than the application to the camera. 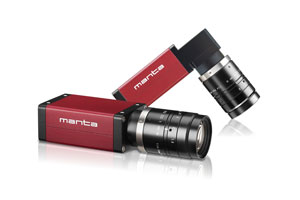 Twelve cameras at six inspection stations
The focus on standardized elements also applies to the current and so far largest plant that GEFRA has ever realized. The current plant is used for inspecting screw joints for the brake lines of vehicles. This requires strict adherence to the tolerances of all geometrical sizes including the quality of the threads to ensure 100% functionality.

The inspection process begins with feeding of the screw joints. The screws are delivered in bulk, separated out via a vibrating bowl and fed into the actual sorting system in two possible positions. They are then transferred to a rotating glass ring and passed by the six inspection stations.

The first of these six stations measures the geometric dimensions, such as the thread diameter, the drill holes and the hex of the screws via edge pursuit in order to ensure the correct spanner width. In addition, possible burrs on the inspection objects are detected here. "As with all measuring stations, we use telecentric lighting and lenses at these positions to determine exact values", explains Rothweiler with regard to the selection of extremely high quality machine vision components at these positions. "This gives us accuracy to the 100th mm."

A further partial system is located in the same space of the station which measures a side view of the nominal and core diameters of the thread, the phase, height and helix.

The next station is equipped with LED dark field illumination and allows further contour inspection for chips. This is followed by surface inspection of the screws which detects damage such as impressions, scratches, deformation or coating faults, i.e. incomplete coating.

The next inspection station, which is illuminated from top to bottom, serves to detect differences in coating as well as deviations in brightness and color. At the end of the completed inspection process, a check is conducted as to whether the threads follow the right direction, are continuous, and whether the thread tips and the thread roots meet requirements. Four cameras are installed at this station for this purpose, arranged at 90 degree intervals. Each of these cameras covers an angle of 110 to 120 degrees, so that the objects can be inspected all-round and overlapping.

Allied Vision camera adapts to any inspection tasks
All twelve cameras in use are Manta G-223B cameras from Allied Vision. The Manta G-223B is a machine vision camera with GigE Vision interface. As a longtime and close partner of Allied Vision, STEMMER IMAGING knew all the possibilities the modular concept of this camera offers and could offer GEFRA an imaging solution tailored to their needs.

As an example, various filter options are used depending on the inspection task: „We use infrared lighting at some stations”, explains Rothweiler. “In that case, the camera is fitted with an RG715 IR pass filter instead of the regular protective glass”.

GEFRA also takes advantage of the various housing variants of the Allied Vision modular concept. At the 360° inspection station, angled head versions of the Manta are used to save space: the optical axis of the camera makes a 90° angle with the rest of the housing. That way, the cameras and their cables are positioned vertically but image the object from the side. Thomas Rothweiler enjoys this flexibility: “We can even choose between a horizontal or vertical sensor orientation depending on the side of the inspected object”, he says.

Good parts proceed
After the final inspection station, all objects which have passed the inspections without fault are ejected from the system via a fast triggered pneumatic valve. "In other plants the faulty parts are often sorted out, but the automotive industry prefers the opposite approach. The OK parts need to be ejected explicitly", says Rothweiler. "This is the only way to ensure that only positively tested parts remain in the process, for example, in case of a faulty ejection valve or other equipment failures."

The ejected good parts pass through a pipe to a rotary table from which they are filled into boxes or small part carriers. A counter ensures that the correct number of parts lands in each container before the rotary table moves to the next section. In the current plant, the GEFRA engineers have achieved an inspection speed of up to 500 parts per minute. "Theoretically, 600 parts per minute are possible", adds the GEFRA CEO.

A PC as control center
According to Christoph Hüsch, GEFRA's EDP Manager, the biggest challenge was the simultaneous control and analysis of all components via a single PC. "Here we use a high performance computer, which, like all our PC's, is designed from standard PC components as a scalable backplane system, and in which we only use the boards necessary for the system." According to the company's CEO, the present plant is unique worldwide in this context: "A single PC evaluates all images of the twelve cameras in the system with a performance of 500 parts per minute!"

A monitor and keyboard are integrated in the unit for simple set-up, display and operation and to allow communication between people. For example, this is where fault reports or sensor reports measuring the filling levels are displayed. Viewing of individual images from the unit, as well as the display of incorrect colors for easier representation of faults, are integrated here.

New ideas in the pipeline
The unit described here has meanwhile been delivered to a customer in France and is performing to the full satisfaction of the user. Prior to commissioning on site through a GEFRA employee, the customers of the Optisort system visited Friedewald for approval and received training. "This procedure has proven itself as customers can then generally operate their equipment by themselves as well as, for example, adapting to other objects", is how Rothweiler describes the last steps on the road to commissioning.

The GEFRA engineers are already working on the next plants and have a few interesting ideas to increase performance even further.