…and every time thereafter. 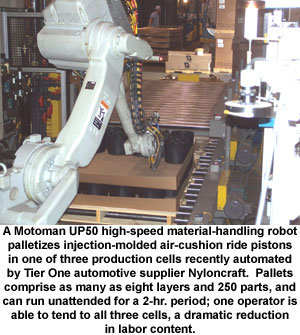 Employing robots to automate repetitive machine-tending tasks has provided Nyloncraft Inc., an injection-molding contract manufacturer, the flexibility to add labor in key areas where it was needed to support growth, without having to hire new employees.  So says Nyloncraft automation engineer Carl Smith, describing the benefits of the company’s recent push to reduce labor costs.

“Adding robots to our injection-molding cells,” says Smith, “has been a focus for the last five years, and has significantly reduced our costs and improved flexibility in the shop.  We’ve been able to bring in more work due to the efficiency gains from the robots, and reassigned machine operators to other critical tasks, such as assembly.”

Since Smith joined the company in 2004, having previously spent four years helping another plastic injection-molding company apply automation to its shop, Nyloncraft has integrated several material-handling machine-tending robots onto its shop floor.  The automation investment was part of a $10 million expansion of the company’s thermoplastic molding operations, originally planned in January 2004. The firm is a Tier One, ISO/TS 16949 and ISO 14001 certified supplier to the automotive industry, with molding capacity to 3000 tons, including large-tonnage dual-shot presses from 1500 to 3000 tons, all in a 165,000-sq.-ft. plant.

A Lead-Off Homerun
Smith hit the ground running after joining Nyloncraft, immediately canceling a robot order that had been placed prior to his arrival and specifying a different robot better suited to the task at hand.

“With this initial automation project targeted back in 2004, I knew it had to work perfectly and get up to speed quickly and painlessly,” Smith recalls. “Otherwise, management and the workers in the shop might have lost confidence in the ability of robots to work in this environment.  I’ve learned that when trying to introduce automation onto the factory floor, the first try has to be successful, to get buy-in for future automation projects.” 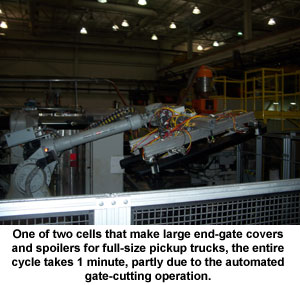 That first try for Smith involved automating three injection-molding workcells, placing robots in the center of each cell to remove parts from the machines, facilitate value-added operations such as drilling and component insertion, and then palletize the parts.  The three cells incorporate 700-ton Cincinnati Milacron injection-molding machines, which produce air-cushion ride pistons.  Prior to becoming automated, each cell required its own operator to drill, inspect and palletize the parts; now, one operator tends to all three cells, checking and replenishing the cell with material, including inserts and cardboard separators for palletizing.  Fully stocked, each cell can run for 2 hours.

“The robots initially specified for these cells were to be mounted above the injection-molding machines and reach down into the mold to remove the parts,” says Smith.  “Installation would have required us to make stands for the robots, and build a mezzanine to allow the robots to reach the drilling operations, which created a safety concern.  Instead, I went with a floor-mounted robot that can come in from the backside of the machine to remove the parts from the mold, a much safer solution and more simple to integrate.  The switch saved the company about $25,000 per robot.”

Flexible and Versatile—to Manufacture Eight Different Models
Now, each of the three cells, which measure 10 by 12 ft., stars a six-axis Motoman UP50 robot with 50-kg payload; an Applied Robotics CXC30 tool changer enables quick and automatic switching of end-of-arm tooling.  Through the use of tool stands and programming, the three cells combined can produce eight different piston models with minimal changeover time.

The robots are high-speed models designed by Motoman to have a streamlined body that helped Smith optimize cell layout.  They move molded parts from the presses through a series of tasks within the cell.  Robot speed peaks at 250 deg./sec. in some axes, 170 deg./sec. in other axes.  Maximum payload is 50 kg; reach is 3.6 m vertically and 2 m horizontally, with repeatability of plus or minus 0.07 mm.

Pistons range in size from 8- to 10-in. dia., 6 to 10 in. tall, and weigh 3 to 4 lb.  They replace aluminum air-rise suspension components, providing, says Nyloncraft, a 33-percent cost reduction and 25-percent weight reduction.

Some of the molded pistons require a mechanical sprue-cutoff operation, some require a drilling operation and some have inserts added.  And, every part moves to a visual inspection station where a Keyence CV700 system checks for holes, inserts and proper part identification. Average cycle time: 70 sec.

Automating the sprue-cutoff operation posed a unique challenge to Smith and his team.  “We developed a special setup to mimic the actions our operators had been using to manually snap off the sprues,” says Smith.  Sprues measure 6 in. long and taper from 3/8-in. dia. down to a point.  Using the new custom-designed cutoff device, the robot places the part into the hole—off center—of a cone-shaped fixture.  Then, a cylinder underneath the cone rotates the fixture and the action from the offset hole snaps the sprue off. 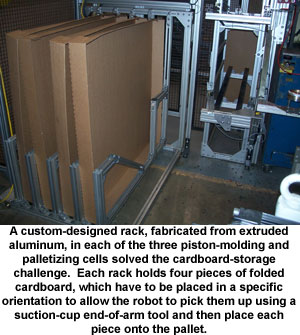 Automated Palletizing
Parts that pass inspection move via robot to a two-tiered conveyor system for palletizing; parts that fail inspection move to an outgoing parts chute.  The robot also places a prefolded cardboard separator at the start of each pallet, and between each layer of parts; the cardboard pieces have a 3-in. folded edge to contain the pistons.  Pallets hold as many as 250 parts and eight layers.

“One of the initial challenges with these cells was how to stage the folded cardboard pieces within the cells so that the robots could grab them.  Also, the folded edge on the cardboard pieces created interference with the wiring harnesses from the end-of-arm tooling as the robots placed the parts on the pallet, another hurdle for us to clear ,” says Smith.  He solved the interference problem with clever and careful programming and the inherent dexterity of the robots, and a redesign of the gripper to extend its reach.

A custom-designed storage rack in each cell—fabricated from extruded aluminum—solved the cardboard-staging challenge.  “Each rack holds four pieces of folded cardboard, which have to be placed in a specific orientation,” says Smith, “to allow the robot to pick it up using a suction-cup end-of-arm tool and place it on the pallet.”  Since each layer fills up in about 30 min., the four cardboard separators allow the cell to run untended for a 2-hr. cycle.

In addition to light curtains that guard the palletizing conveyors, operator safety is ensured thanks to the integrated zone rings designed into each robot. As each robot turns on its base plate, limit switches sense its position and send permit signals to the cell controller, which communicates with an array of access gates within each cell.  For example, the zone ring prevents the robot from entering the area where the cardboard racks are located while the operator is restocking cardboard in that gated area of the cell.

Up Next: Handling Large Parts with Robots
After automating the three palletizing cells, in mid-2006 Smith turned his sights toward automating a pair of new injection-molding cells that produce large end-gate covers and spoilers for full-size pickup trucks.  One cell features a 1500-ton Cincinnati Milacron press, the second a 1750-ton Engel press; both include Motoman HP165-100 robots with NX100 controllers, and the Applied Robotics’ MXC160 tool changer that enables the cells to quickly adapt to manufacturing either the spoilers or the covers.  Parts are 3.5 to 4 ft. long and weigh 2-3 lb.; end-of-arm tooling with vacuum cups and grippers stabilizes the parts during transfer.

The high-speed HP165-100 robot is ideal for handling large, heavy parts.  Its extended work envelope extends behind the body, allowing space behind the robot for robot tool storage or maintenance.  It boasts a 100-kg payload, 4.1-m vertical reach, 3.0-m horizontal reach and repeatability of plus or minus 0.2 mm.  The high performance NX100 controller, features a Windows® CE programming pendant, fast processing and a robust PC-based architecture.

“In these cells, we needed to automate and produce two finished parts with a 1-min. total cycle time,” Smith says, “a difficult challenge considering we’re running two-cavity tools.  The key was developing an automated process to cut off the gates.  We initially outfitted each cell with a router to cut off the gates, which not only made a mess, spraying chips all over, but also required a part-flipping operation.  Cutting the gates off of both molded parts required the robot to wait 15 to 20 sec. for both parts to be cut; we redesigned the operation to reduce the cutoff process down to 8 sec. total, from the time the robot grabs the parts from the mold to cutoff.”

Now, after the robot carries the parts from the mold to a fixture, the new gate-cutoff process uses a set of rollers mounted to a trolley that rides over the fixtured parts.  As the trolley moves, the rollers apply pressure to the top and sides of each part and a knife cuts the gates from the part. The Nyloncraft toolroom developed the cutter.

“We had to do a lot of development work to guarantee that the parts locate precisely in the fixture during each cycle,” stresses Smith, “and that the mold and ejectors are in the same position for each cycle.  This ensures that that the robot accurately locates the parts in the cutoff fixture and also accurately controls the amount of pressure applied to grab the parts--too much pressure and we would mar the part.”

Average cycle time has been refined to just 50 sec., surpassing the 1-min. goal.