IAS Inc., a Wisconsin-based systems integration company and Visual Components customer, recently told us about a unique project they completed for a Fortune 500 agricultural company — automating a seed-testing lab.

“The customer had been using a crew of over 100 people, with each person individually performing the entire preparation portion for the testing cycle of the product,” explained Kyle Weise, Marketing Director for IAS. “This included tedious operations, such as prepping trays, individually placing seeds, and manually logging tray and seed data.”

What started as a project to automate a single task soon grew into something much bigger – finding a way to automate the entire seed-testing lab. The objectives quickly became much more complex and multi-faceted.

“The customer was utilizing a temporary labor force with minimal training,” said Kyle. “There were issues with quality control, high turnover rates, and high labor costs.”

There was also an issue with data integrity. The customer needed greater confidence in the data that was being acquired and tracked on each seed batch.

As the testing process procedures were highly repetitious and subject to demanding control parameters, they were great candidates to take advantage of the precision and efficiency of robotic automation.

IAS started the project by visiting the customer’s seed-testing lab to talk with workers and key personnel on-site.

“We believe that great systems accommodate the internal processes of companies,” said Kyle. “So, when we approach a complex project like this, we like to start by getting on the floor and meeting with key people. We learn how they work and what they think could be improved, and use this information to build a better system.”

IAS quickly learned that each operation area at the lab was dependent on each other, so it was key for them to start by breaking each area into modules and laying out the central architecture. Once the engineers had this complete, they could divide up the work more effectively while maintaining the central control framework. 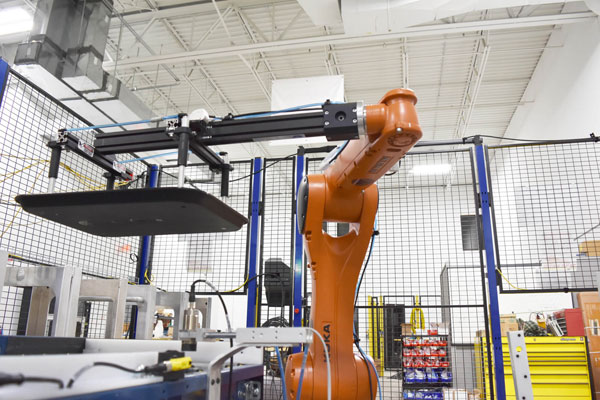 To help validate this concept and explain it to the customer, IAS used Visual Components 3D manufacturing simulation software.

“Using Visual Components to create layouts and simulate our designs, we were able to fully showcase the creativity and capabilities of our team to the customer,” said Kyle.

Visual Components also helped with keeping the momentum going early on in the project and improving communication.

“The ability to present simulations and virtual models of the system’s operation to the customer, get feedback, and quickly make adjustments to the designs; really helped to streamline the feedback loop,” said Kyle.

“The customer felt prepared for what was coming and there was a clear understanding among all stakeholders on what needed to be done.”

Using Visual Components to create layouts and simulate our designs, we were able to fully showcase the creativity and capabilities of our team to the customer

“In the tray unloading station, a robot unloads empty trays from carts,” Kyle explains. “The trays are then prepared for seeding, which is done by applying a nutrient gel to the tray or placing a damp sheet on top of the tray. Trays are then sent down the line to the seeding station.”

In the meantime, seed-filled jars are fed to a robotic un-jarring station, where a robot removes the jars from the carts, unscrews the lids, and then places them on a dual-belt conveyor. The conveyor brings the jars to another robot that lifts and pours the seeds into a dispensing system. The empty jars are then placed back on the conveyor system and sent away.

At the seeding station, a dispensing system evenly rolls seed onto the trays in a 10 x 10 pattern. The trays then move on to an inspection station, where they are imaged to verify that the seeding pattern is correct, and any non-seeds or defected seeds are detected. A picking robot then replaces non-seeds and defected seeds with additional seeds from the same batch, and adjusts seeds on the trays to ensure they fit the pattern. 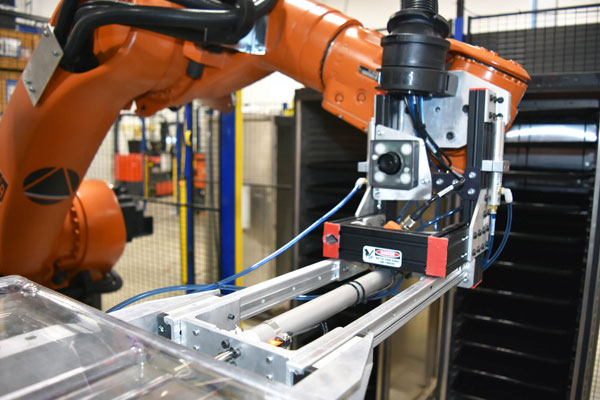 Designing the inspection process was one of the more technically challenging aspects of the project.

“Performing detailed inspections on organic matter can be difficult, as it’s often a challenge to define the parameters of a defect,” said Kyle. “Factors such as color, shape, and size can all be variable and yet not complete indicators of pass/fail criteria.”

“We used machine learning to solve these problems. Our vision team trained a neural network around the parameters of the seed set and we saw great results once we deployed it in the system.”

After testing, empty trays are carted out of the control room and robotically unloaded, imaged, washed, and reloaded into the same carts that are able to re-enter the system at the start of the line. 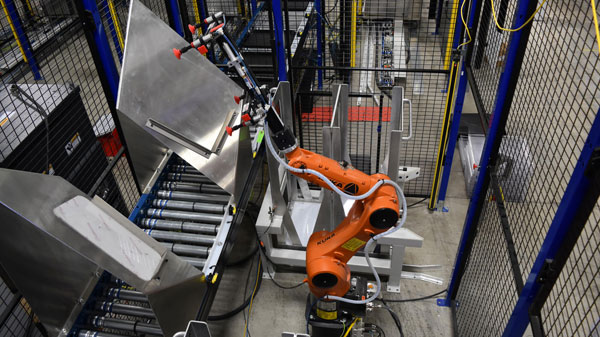 We used machine learning to solve these problems. Our vision team trained a neural network around the parameters of the seed set and we saw great results once we deployed it in the system.

The result of the project was an increase in throughput and reduction in labor costs. In addition, IAS succeeded in giving their customer confidence in their data.

“The customer now has full tracking of the entire process,” said Kyle. “From a data analysis standpoint, they have higher data assurance and traceability.”

Q3 Robot Orders Put 2021 on Track for Biggest Year Yet

The Rise of Autonomous Mobile Robots