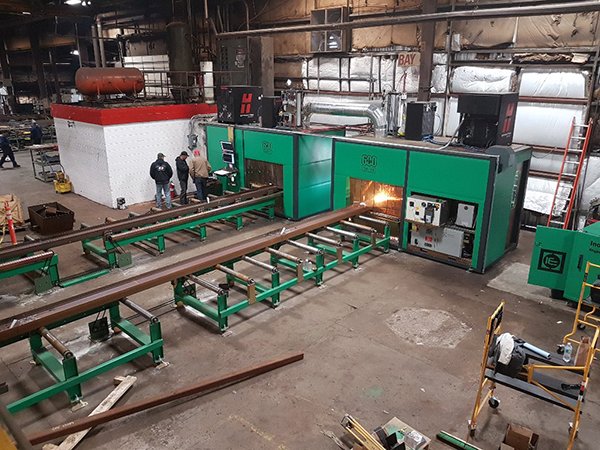 While most modern industries were widely adopting automation, heavy steel fabricators were not, which was partic-ularly surprising considering the lack of skilled metal fabricators. And when fab-ricators did leverage automation, they usually relied on a cobbled-together solution that used the cheapest possible parts and guaranteed uptime until just past the warranty.

Inovatech Engineering Corp., maker of integrated robotic solutions for manufacturing, produces the industry’s fi nest 2D and 3D metal-cutting tables as part of its SteelPRO line. “When it comes to cutting tables, most integra-tors have made them on the fl y to meet specifi c customer requests, using the cheapest components available,” said Clement, president of Inovatech. “But not us. Our SteelPRO line of 2D and 3D cutting tables uses FANUC machine vision–guided robots armed with the most powerful Hypertherm XPR300 plasma cutter, and the fi nest motion control systems from Güdel to provide the four-side, bevel-cut capability and more that comes with each SteelPRO unit.”

"Inovatech’s key to success was depen-dent on choosing channel partners and suppliers from the beginning,” said Clement. “Güdel has been a key part of our success because of the constant quality of the linear motion compo-nents and more importantly the sup-port that Inovatech receives from the engineering and management team at Güdel." When modern production lines can lose $10,000

a minute, using the best components available just makes sense, Clement added. But what he didn’t fully realize was how SteelPRO’s use of modern automation tools would boost a fabricator’s production.

For example, because of machine vision — industrial cameras connected to PCs running specialized image processing software — and other software im-provements, Inovatech’s Async control software program is 40 percent faster today than it was during its introduction just a few years ago. And while that’s significant, the benefits of using an automated cutting table made of today’s finest automation components trans-lates to 400 percent more productivity for Inovatech’s customers.

“At our first install, it took an experi-enced technician 6.2 hours to cut one ton of material,” said Clement. “After the install, the one ton of steel took 1.6 hours, for a 400 percent throughput improvement.” Another small fabricator was billing $2 million in contracts per year, Clement added. After installing a SteelPRO 1000, the company invoiced $6.4 million in nine months.

“We’re proud to build machines that continually improve — as shown by our latest update, the Async control pro-gram for the SteelPRO line,” concluded Clement. “The 2D table line represents a 2,000 percent larger market than the 3D cutting table markets that we’ve served in recent years. We’re looking forward to showing off the new system to a market that’s ready for innovation. With the SteelPRO systems, fabricators can task their most skilled tradespeople on the hardest projects, confident that our solutions can handle the through cuts, bevels and plate processing that doesn’t demand the highest cutting skill set.”