FiRAC, a company of Groupe SNEF, is a leading firm that specializes in the design and integration of robotics and automation, specifically in streamlining industrial equipment and processes with intelligent technical solutions. It often relies on Visual Components simulation technology to help show its clients just how much more efficient it can take its processes should it adopt a greater level of automation. This was the case with one of their projects with PSA Group, which produces automobiles of renowned global brands including Peugeot and Citroen. The firm was looking for a way to improve quality but keep its cycle times consistent with a specific screw tightening task on the assembly line. Utilizing Visual Components’ production simulation technology, FiRAC was able to provide an efficient solution that struck the perfect balance between cost and productivity. Here’s a closer look at how:

In automotive manufacturing, production times are vital and so is the quality. In this case, the PSA Group’s automotive manufacturing plant in Sochaux, France, was looking to optimize front-wheel screw tightening to accelerate cycle times and improve the production quality. FiRAC utilized Visual Components simulation technology to demonstrate how the process could be automated. Screw tightening at the plant was previously being performed manually, so in addition to creating an automated solution, cycle times had to remain fast and consistent to ensure overall productivity goals were met.

Specifically, this sub-assembly requires five screws to be tightened for the vehicle’s front wheels, four of the screws (M6-8 Nm) which are on the front side and one (M8-20 Nm) on the backside of the panel. This assembly was previously performed by a worker across four shifts, however, this individual’s skill level largely dictated performance cycle times, which varied from 30 to 60 seconds. The inconsistency of this task often made it challenging to stay in line with the main assembly.

“Any second lost during this process means a loss of productivity in the mainline considering a car is produced about every 60 seconds,” says Corentin Monnot, Project Manager at FiRAC.

The first scenario that was tested included just one robot performing the screw tightening task, which it performed in just over a minute. 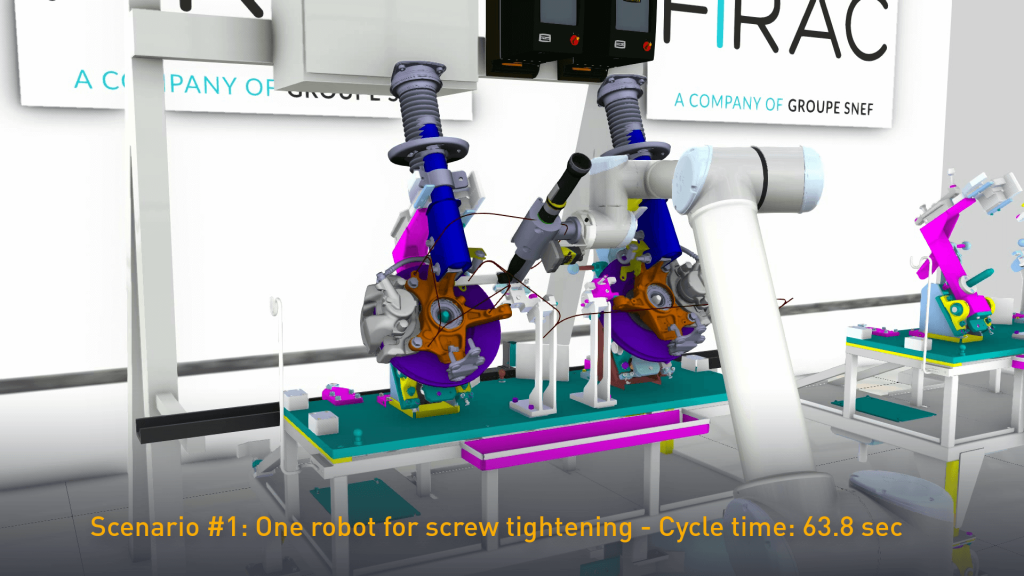 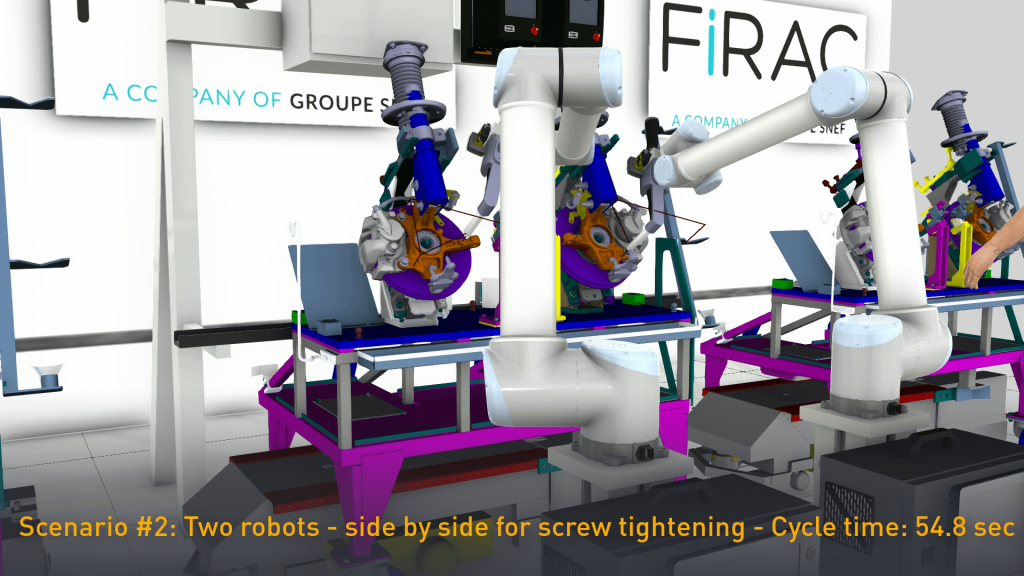 The final third scenario was designed with two robots, but in a face-to-face setup. This proved to be the most optimal solution and the fastest simulation of the process, completing the task in under 53 seconds. This was the simulation that was accepted by PSA Group, as it proved to be the ideal compromise between cost and performance. 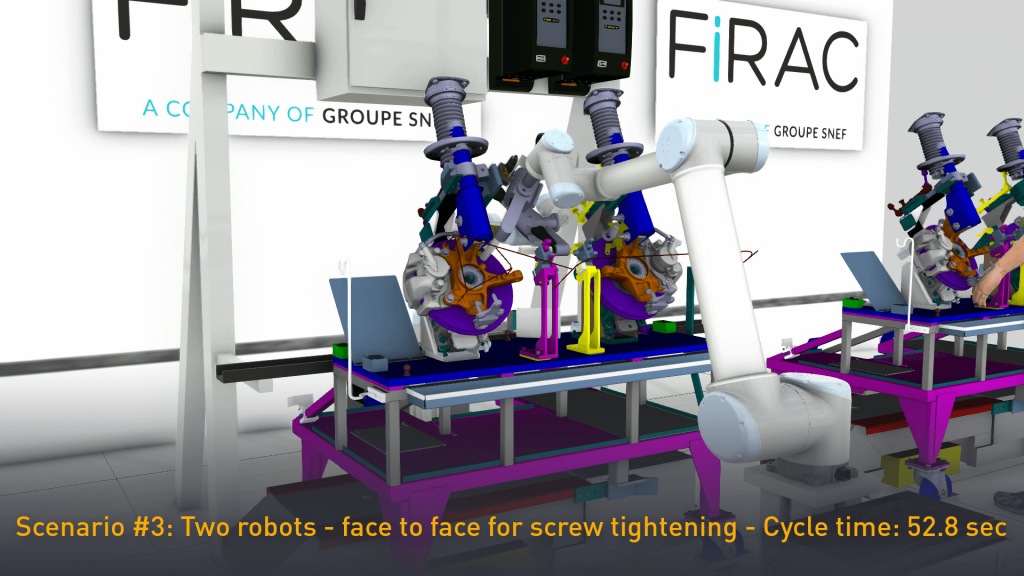 “Visual Components is so versatile that it was very easy to implement the different configurations and view their effect on the cycle time,” says Corentin Monnot, Project Manager at FiRAC. “Once we found the best simulation, we were able to edit a video of the process and provide quantified and visual reasoning to support our final solution.”

Visual Components is so versatile that it was very easy to implement the different configurations and view their effect on the cycle time. Once we found the best simulation, we were able to edit a video of the process and provide quantified and visual reasoning to support our final solution.

FiRAC competitors that were also consulted for this project insisted that the process could be automated using only one robot. However, these competing firms failed to show any visualization to truly demonstrate how it could be done quickly and efficiently.

In addition to the visual representation of the process, Visual Components allowed FiRAC to consider multiple external time-consuming factors and anticipate their effect. Thus, the AGV moving time, the screw tightening time, or even the camera process time were taken into account very early stage, therefore providing a strong engineering background to the proposal.

That was one of the big advantages of using the Visual Components software that the visualized and validated proposal could be effectively communicated to PSA Group. 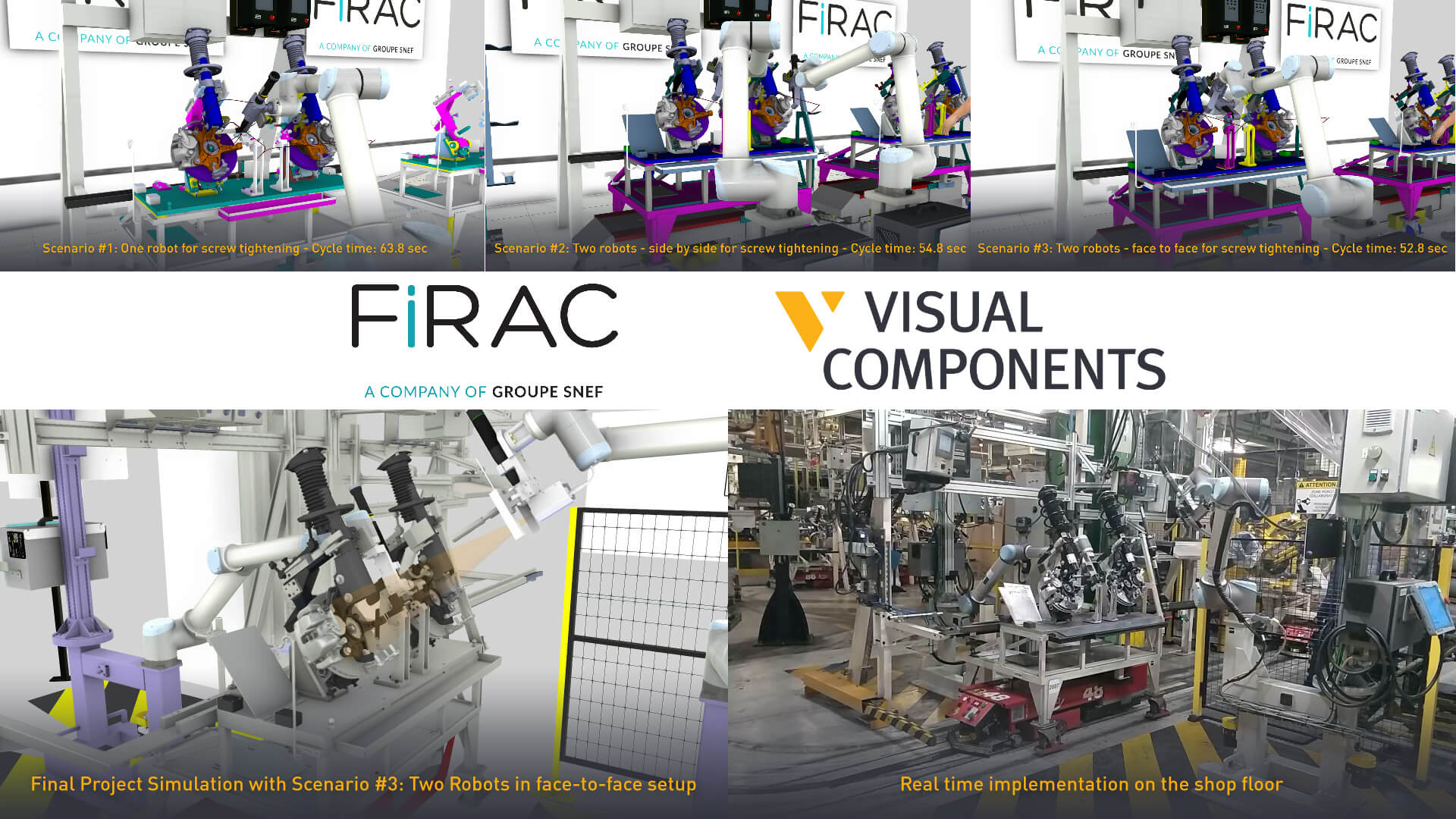 Visual Components also helped FiRAC solve optimization challenges with the robots so it could better understand and design the best way to reach the client’s desired cycle times. For example, in the simulation where both robots were positioned on the same side, one robot would have to wait for several seconds for the other to finish its task before it could begin its respective task. In some simulations, the two robots would collide with one another, further stalling the process. It’s part of the reason why the two robots in face-to-face positioning proved to be the most efficient solution.

“With simulation, it was clearly demonstrated why it was impossible to fit the process in the required cycle time with only one robot,” said Corentin Monnot, Project Manager at FiRAC. “The customer was really impressed with the visual implementation of the process – and that’s how FiRAC got the competitive edge to win this project.”

And Visual Components role didn’t stop after FiRAC won the job. After the project was awarded, FiRAC continued to utilize the technology to validate the mechanical design of all the elements to ensure accessibility, proper clearance and factory implementation. The solution was implemented within about 6 months, with FiRAC spending a few months on-site to fully test and integrate the solution on the shop floor.

The customer was really impressed with the visual implementation of the process - and that's how FiRAC got the competitive edge to win this project.