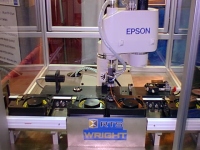 The manual assembly of fiber optic pigtails requires operators to work with super small parts that have sub-micron assembly tolerances. Improper component assembly causes misalignment of the fiber cables which greatly reduces the output capacity of the finished connectors. Traditional first pass yields from these manual assembly operations are in the 5-10% range. The results are costly and time consuming rework or scrapping components that may have values of thousands of dollars

RTS Wright Industries, a leading manufacturer of automation equipment, designed a modular, semi-automatic system for the assembly of fiber optic pigtails. Operators load pre-cut fiber cable on to a pallet. The next station automatically strips, cleans and cuts the cable ends. At the third station the cable is automatically fed into a connector ferrule and glued into place. An EPSON EC350 SCARA robot is used for all the material handling operations in station three. RTS Wright selected the EC350 because of its compact size and tight repeatability specs. They also used the EPSON RC+ Controller's VB Guide feature to help create a customized MMI. At the fourth and final station, the completed assembly is sent to an IR Heat cure oven for final epoxy cure.