Counting Eggs – Not Only on Easter 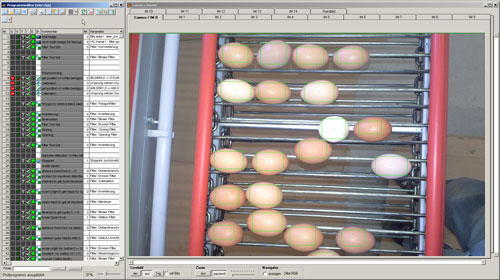 These days "Image Processing“ is a topic in many industries and it is de rigeur in industrial applications. Hardly a production line can manage without industrial camera and evaluation software such as EyeVision. Also the agribusinesses.

One example is the counting of eggs on a conveyor belt. In modern chicken houses to handle this, camera-based systems are installed.

The difficulty here is, that the eggs on the conveyor belt are not in any order and sometimes are touching each other and sometimes not. In this current case the eggs on the image captured by an industrial camera, have to be separated not only from each other – egg between egg – but also from the background. Only then an accurate counting of objects can be guarantied.

For this the EyeVision uses a series of filters, which allows to separate and count the eggs under these conditions. Due to the intuitive drag-and-drop programming of the EyeVision software, these filters are easily comprehensible and can also be used in other cases, where other similar objects have to be counted. 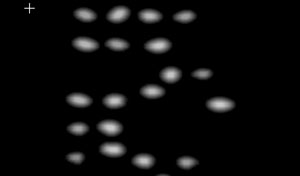 But before that, there is the question of a suitable illumination or respectively an image, which is rich in contrast. Additionally the shadow of the eggs should be as little as possible, as the separation of the eggs from the background and from each other can become blurred. A strong contour is essential to count objects.

For illumination e.g. a transmitted light can be considered. This will have the result, that the eggs appear dark against a bright background. Alternatively the eggs can be illuminated from above with a strong incident light, which will show the eggs bright on a dark background. In both cases a daylight shielding is recommended. 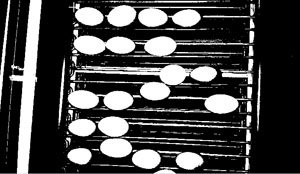 In our case the second option was chosen – white eggs on black background - where the eggs are also separated clearly from the background. Several different filter commands are needed to separate and count the eggs, which are similar to each other in shape and color. The result are properly separated eggs, as shown in the Camera Viewer of the EyeVision software.

In the future it is also possible that those camera-based systems can be used to determine the volume and therefore also the weight of the eggs.