Brewery is More Competitive with Robotic Packaging and Palletizing System 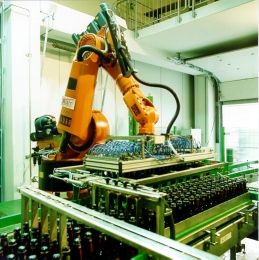 Medium-sized breweries can survive in a tightening market only with mature marketing concepts and unusual product ideas. The packaging industry, too, is being put more and more to the test by the segmentation of consumers into smaller target groups requiring varying forms and sizes of containers. As a result, an increasingly important role is being played by six-axis robots, which represent an efficient alternative to conventional technologies. With their short cycle times and their ability to handle objects gently, they can be used to optimize process sequences, and thanks to their flexibility they also represent an investment in the future.

Pyraser Bier GmbH & Co KG was founded in 1870 in Pyras, today a part of the municipality of Thalmässing in Middle Franconia. In addition, the company, which employs 45 persons, sells various carbonated beverages, juices and other non-alcoholic beverages. Pyraser uses refillable bottles exclusively. Annual direct sales within a radius of approximately 50 km amount to over 9,500,000 liters; this represents a turnover of about 15 million DM. The main customers are the restaurant trade, with about 25%, and beverage specialty stores with 75%.

At present the brewing industry has hard times ahead; experts expect a mass extinction that could result in the demise of almost a third of Bavaria’s 650 breweries. There are many reasons for this; for one thing, alcohol is not “in”, and secondly, major national brands and beers from the former East Germany are penetrating the Bavarian market.

“In an increasingly competitive market, we must produce high quality products in a cost-effective manner, and open up smaller target groups through the use of modern container forms and sizes,” explains Georg Bernreuther. “

In the end, a brewery can only survive if it is a high-tech enterprise. For Pyraser, cutting-edge technology begins with their own wastewater treatment facility, the use of biogas from a nearby waste dump, and now the use of robots. “It is important to optimize technical processes,” Bernreuther adds. “For this reason we need a highly flexible packaging system.”

Today, Pyraser employs two KUKA KR 150 robots equipped with pneumatic grippers, each of which does its “job” for the period of one shift, three days a week. Compared to the set of conventional machines with palletizing systems that was used before, the floor space required has been reduced by approximately 150 m2, a decisive factor in favor of the robots. Costs for the cell were comparable to those for the conventional equipment.

The brewery can fill 24,000 bottles in an hour; since the robots can handle 30,000 bottles (1,500 crates) in the same time period, they are thus in a position to compensate for malfunctions in other areas of the brewery. To be able to handle the bottles delicately despite this high throughput, what is needed are short cycle times without high acceleration values, i.e. quick, fluid and precisely-coordinated motion sequences.

Two robots are used for the operation: One of the KR 150s is taking four crates with empty bottles from the roller conveyor, lifting out all 80 bottles simultaneously and placing them on a conveyor belt. The second robot is taking the same number of full bottles from a belt, placing them in four empty crates, and then putting the crates back on the conveyor system. To complete one cycle, the robots require 9 seconds for filling and 9.6 seconds for emptying.

These cycle times differ because of the measurements that the robot makes of the position of the upper ends of the empty bottles. This way the system prevents the robot from colliding with the bottles. Apart from that, the robots do not need any other sensors, since the crates are centered for handling in a position defined in two dimensions, and at the most only their height can vary.

A robot with a load-bearing capacity of 150 kg is needed for this application, since four full crates with ½ liter bottles weigh 80 kg, and the end-effector weighs an additional 70 kg. The KR 150 likewise shows its flexibility by the fact that its carrying capacity can be increased to 200 kg through the minor mechanical adjustments.

The KUKA systems partner, RST Roboter-System-Technik GmbH, located in Barbing near Regensburg, supplied the complete robotic cell, including the robot substructure, the centering unit for the crates, the safety devices, and a special feature: a pneumatic gripper developed especially for Pyraser. The empty bottles did present one problem in the design of the end-of-arm tooling: sometimes bottles are stuck in the crates upside-down, so that they cannot be gripped by the robot.

To prevent system malfunctions and the associated time-consuming manual interventions, the KR 150 must be able to remove the crates from the pallet regardless. For this purpose, the robot, after two failed attempts to grip the bottles, moves at only 10% of its usual velocity, while at the same time increasing the pressure of its sturdy wrist. This way the robot is able to engage its gripper hooks in the crates, and lift them off.

“One positive feature, because it is apparently not taken for granted everywhere, is the visualization of faults on the Windows interface of the KUKA Control Panel. Because of this, the employee involved is always kept informed as to the status of the system, and can locate the malfunction quickly,” says Georg Bernreuther. “The control panel rests securely in the hand, which offers ergonomic advantages. Furthermore, the real-time capable PC controller allows continuous updating.”

If it had to choose again, the Pyraser Brewery would make the same decision today. The robots’ low maintenance requirements and also their design are reasons Georg Bernreuther refers to them as “fun” machines, and says that he is looking for more ways to use them.

For example, in the future the robots already installed are to be equipped with tool changers so that they can also be used for handling barrels. This way the strength-sapping manual work of moving the full barrels, which weigh 65 kg, can be avoided.

This work will demand that the robots show more maneuverability, which is, however, provided in any case by virtue of their six-axis design. And if in the future Pyraser realizes its intention of using a mixture of disposable and refillable containers, the KR 150 will have an even greater opportunity to show off its high flexibility.