Since April 2009, the Y&S Candies plant in Lancaster, PA—home of the Twizzler—has been busy upgrading its four 20-yr-.old robotic case-palletizing cells, replacing aging robots with new, state-of-the-art Motoman models designed specifically for palletizing applications.  While the project originally was specified as a straight obsolescent-equipment replacement for Y&S, a division of The Hershey Company, Hershey Senior Packaging-Systems Engineer and project manager Alex Diaz explains how the robot upgrade has made several significant improvements to the plant’s palletizing operations.

“We’ve seen an increase in speed of as much as 20 percent (jumping from 8 cases/min. to 10 cases/min.),” Diaz says, describing the productivity pickup realized after retrofitting two of the four palletizing cells in April and May of 2009 (the remaining two cells were slated to receive their robot retrofits in August or September). “The new robots (Motoman EPL160 four-axis models) execute their moves more quickly than did the older robots, with quicker acceleration.  We get faster picks and drops, keeping the cases moving.  Also, dropped-case incidents are few and far between now, thanks to a new end effector specified with the robots that better and more reliably handles our larger and heavier cases.” 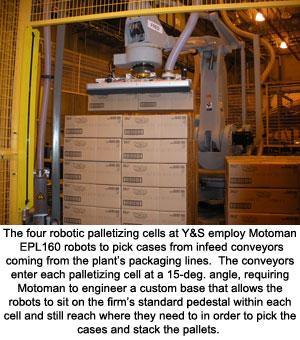 Fitting New Robots into Existing Cells
Diaz belongs to a team of packaging-system engineers employed out of The Hershey Company Global Operations Engineering Division. Diaz, along with Andrew Brighton, Staff Engineer at the Y&S plant, approached Motoman early in 2008 after deciding to replace the aging robots at Y&S with newer Motoman EPL models.

EPL160 robots (160-kg payload) offer a 124.4-in. horizontal reach, and use through-arm cable routing to maximize cable life while serving multiple infeed conveyors and pallet stations.  The robot’s Utilities Management Package features 23 wires for communication and six internally routed air lines for end-of-arm tooling.  This setup eliminates pinch points and potential interference with other equipment in the workcell, improving flexibility and minimizing downtime.  The robot’s vertical reach is 119.1 in., and position repeatability is plus or minus 0.5 in.  EPL-series dedicated palletizing robots also are available with payloads of 80, 300 and 500 kg.

The four robotic palletizing cells at Y&S pick cases from infeed conveyors fed by a main conveyor trunk line coming from the plant’s packaging lines.  Cases of the firm’s candy products—Twizzlers, Nibs, etc.—range in size from 3.1 by 5.3 by 9.9 in to as large as 15.1 by 16.4 by 26.5 in., and weigh as much as 62.2 lb.  Of the 149 active SKUs in use, 125 are column-stacked patterns and 24 have the top layer rotate 180 deg. to interlock the load.  All receive a base slipsheet on each empty pallet, and 17 receive an intermediate slipsheet—all handled by the robots.  Among the specifications Motoman received from Diaz: the systems must be able to pick and place one to four cases, or a slipsheet, in 8.5-9.0 sec.

Leveraging Customized Simulation Software
“The palletizing operation uses 52 different pallet patterns based on specific customer requirements,” Diaz explains, “and the plant creates new patterns several times per year.  “With the robot upgrade, we also integrated new offline palletizing-simulation software  that allows the engineers to create a new pallet pattern in as little as 10 min.  And, in production, the operator can change over from one palletizing pattern to the other in less than one minute.”  This is done by selecting a new SKU for each lane from the HMI panel.  One operator per shift oversees operation of all four of the robotic-palletizing cells—and the cells run around the clock, three shifts, 24/7, handling 85 percent of the Y&S plant’s palletizing workload.

Motoman’s palletizing software creates a new pallet pattern algorithm used by the robot to automatically calculate the build path.  The software is stored on a central PC that serves all of the robots at Y&S and uploads the jobs as needed to each robot when the robot requests a new pattern.

Using the software, Y&S engineers can quickly apply changes to box and pallet size, as specified by the customer, to a pre-existing pallet pattern, allowing quick and automatic generation of a new pallet program.  The box size sizes the robot uses to calculate the patterns are stored in each customer’s SKU database.  When the robot begins to run a new pattern, it downloads from the central PC, the box dimensions, instructions for layer rotation, and the location of slip sheets, as well as any special build instructions.  The download process takes 6 seconds/pattern.  Then the software can model build interferences and run palletizing simulations to check for any inference or mistakes that may have been made during the setup of a new pattern by the operator.  If the simulation looks good, the customer is assured that the robot will run the pattern problem-free.  The palletizing system can handle as many as 30 layers and approximately 100 boxes/layer.

Motoman engineers Mark Gleadle and Greg Morgan developed the software for the plant’s unique conveyor configuration.  Says Diaz, “Our conveyors were designed to enter each palletizing cell at a 15-deg. angle, rather than the standard cell layout where the conveyors would typically transfer at 90 deg. from the main conveyor.  Also, the outfeed conveyors were only 12 inches apart, not allowing much room to build the pattern.”

“We challenged Motoman to make the robots work in our existing cells,” adds Diaz, “and there were some challenges there.  This required them to customize the programming and palletizing software, and also to engineer a custom base for each of the robots.  This new base allows the robots to sit on our standard pedestal within each cell and still reach where they need to in order to pick the cases and stack the pallets.  Now, thanks to the custom software, we have more flexibility as to how we set up the end effector, the pick points and angles.”

All 52 of the Y&S plant’s existing pallet patterns already have been reprogrammed for use by the new Motoman NX100 robot controllers that direct each robot—Motoman converted 30 of the programs and Y&S engineers handled the rest.  The NX100 controller features a Windows CE programming pendant, and offers as many as 100 user passwords in four security levels—user, editor, maintenance and supervisor.  Engineers can set the passwords to restrict and log and changes made to production programs. 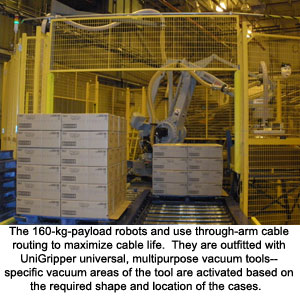 It’s All in the Grip
The end effector Diaz specified for each of the four new robots is the UniGripper, a universal, multipurpose vacuum tool from Swedish supplier Tepro Machine & Pac System (represented in the United States by Tepro Vacuum Products Inc., Ft. Lauderdale, FL).  Specific vacuum areas of the tool are activated based on the required shape and location of the cases, as programmed into the software.  This allows Y&S to use one end effector to handle all of its package sizes, picking up anywhere from one to four cases depending on the pattern specified.

“Also, we find that the tool—one large foam-covered plate—seals to the boxes much more effectively than did the suction-cup tooling used previously,” says Diaz.  “That allows the robots to more reliably handle the bigger and heavier cases without having to slow down, as they previously were required to do.”  The tool can pick up two or three of the plant’s heaviest cases at one time; before, explains Diaz, the vacuum-cup end effectors could only grab one at a time.