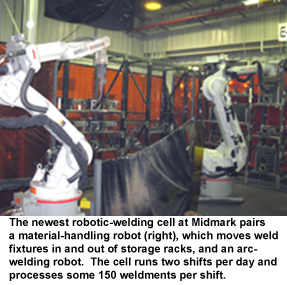 Healthcare-product manufacturer Midmark Corp, knows robotic welding inside and out. Back in 2005 the firm outfitted its 225,000-sq.-ft. plant in Versailles, OH, with a Motoman Robotics-integrated automated resistance-welding cell to assemble cabinets for a new line of examination tables. The cell brought new life to the firm’s stable of metal-fabricating equipment, including press brakes, laser-cutting machines, stamping presses and seven dedicated assembly lines. It has since added a Motoman® robotic gas-metal-arc-welding cell, for higher-volume assemblies.

“Our Power Procedures line of medical tables supports a wide range of specialty procedures,” says Midmark manufacturing engineer Joe Wuebker.  “These tables can include any number of accessories, and they’re delivered within an extremely tight three-day lead time.  Virtually every table is a custom order whose assembly requires as many as 30 different weldments.”

Manual Welding Simply Too Labor Intensive
Building the new, custom tables using manual welding became extremely labor intensive for Midmark, according to Wuebker, requiring operators to constantly move welding fixtures on and off the shelf. “We had a team of three welders per shift assigned to the program,” he says.  “Two would weld while one would be responsible for handling and loading fixtures and for removing finished weldments. To automate the cell and relieve the operators from the physically challenging task of manipulating the heavy fixtures, we decided to turn once again to robotics.” 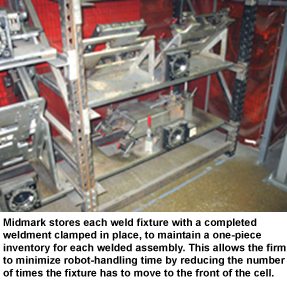 In March 2009, Wuebker and his team issued the purchase order (again to Motoman Robotics) for a cell that features a material-handling robot equipped with a tool changer to move the weld fixtures to and from a storage rack. System installation began just a few months later and production launched in October 2009.

“We’ve automated about 20 of the 30 or so weldments needed to support this product line,” says Wuebker, adding that the remaining fixtures should be ready for the robotic-welding cell shortly. The largest, most complex fixture combines 41 components and requires 84 welds to fabricate a scissor-lift assembly.
All fixtures mount on a common 24- by 50-in. base plate to facilitate robotic handling. A machined slot in the base plate accepts an off-the-shelf pneumatic tool changer manipulated by the handling robot. Part-presence sensing ensures safe and proper engagement.

“Before we brought in the robots, some of the fixtures had to be split into segments to allow the operators to safely handle them,” says Wuebker. “Now we can handle them as one-piece units (weighing no more than 400 lb.). We’ve eliminated any ergonomic concerns with manipulating the heavy, bulky fixtures, which definitely factored into the ROI calculations for justifying the investment for the cell.” 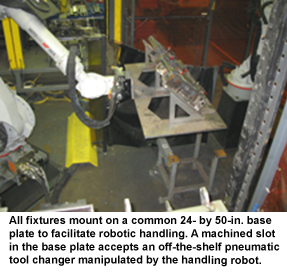 RFID Error-Proofs the Process
With new orders arriving at the cell at such a quick pace, error proofing is critical. To assist the cell operators, Midmark outfitted the setup with a Turck RFID (radio-frequency identification) system to monitor and verify fixture selection. The operator receives a kanban card identifying the required weldment. Each card includes a bar code that is scanned to enter the job into the queue. Typically only five or six weldments are scanned ahead, to allow for any last-minute changes.

With jobs entered into the system, the material-handling robot then retrieves the appropriate weld fixture from the designated rack location and places it into a manual load station. An RFID reader verifies that the correct fixture has been staged via an RFID tag affixed to the fixture. After verification, the cell controller signals a roll-up access door, which protects the operator load area, to open. The operator then pulls the fixture (with the assistance of a track system) into a staging area where he unloads a completed weldment that has been stored with the fixture.

“We maintain a one-piece inventory for each welded assembly,” says Wuebker. “This allows us to minimize robot-handling time by reducing the number of times the fixture has to move to the front of the cell. At first we stored the fixtures empty, but realized that this was causing a wasted trip. Based on our flexible production schedule, the finished weldment may sit in inventory (in the fixture) for as little as an hour or for as long as a couple of days.”

Weldments can weigh as much as 80 lb., so the cell is designed to allow crane access to handle the heavier assemblies.

Cell Control Less PLC
Once the fixture has been emptied, the operator loads the weldment’s component parts and depresses the start button on the cell control. Parts are mild steel as thin as 16 gauge sheet metal and as thick as 3/8-in. bar stock. The roll-up door closes; the handling robot indexes the fixture to a weld station, and the RFID system then tells the welding robot which program to run. 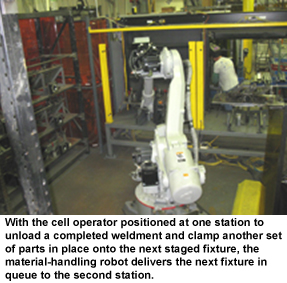 The cell runs without the use of a PLC. All production-sequencing logic is programmed using the robot controller’s on-board ladder logic. This includes the inputs from RFID tags and the bar code scanner for part demand.  Also, Motoman Robotics provided a human-machine interface (HMI) on the robot teach pendant’s color touch screen to display for the operator the part numbers in the queue and the number of parts completed, as well as the status of several critical sensors in the workcell. While the robot welds, the operator loads/unloads from a second station.

After welding the required number of parts, the handling robot moves in to index the fixture back to the storage rack, where it will sit until another kanban card is received. If the part is needed immediately, a bypass program can be engaged through the robot teach pendant. This signals the robot to move the fixture to one of the open, manual pick stations, where the operator can slide the fixture (with finished weldment still clamped) out for unloading. After the operator unloads the weldment, he either reloads the fixture with parts and sends it back into the cell for welding, or indexes the empty fixture back into the cell, hits the start button, the roll-up door closes and the handling robot places the fixture back into the storage rack. 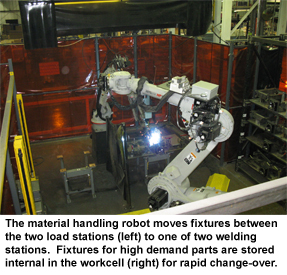 ROI
Bottom line: “The robotic cell allows one operator to do the work of three,” says Wuebker, allowing Midmark to reallocate its highly skilled welders to other areas of the plant.  The cell runs two shifts per day and processes some 150 weldments per shift.

“Our production level is the same as before,” Wuebker adds, “with much less labor. And, weld quality has significantly improved, critical since many of the welds are visible. We’ve also eliminated any chance of missed welds that would require manual rewelding and avoid errors such as incorrect weld length or fillet size.”
“Overall, any weld-quality issues have been reduced dramatically,” Wuebker adds. “When we add up all of the savings—including improved ergonomics, increased operator safety, labor savings, a 10 percent reduction in weld wire consumed (saving $1,400/yr.) and a 20-percent reduction in the amount of weld grinding required (saving $50,000/yr.)—the cell payback period should come in around 18 months.”

By Dan Davis, Editor in Chief, from The FABRICATOR, reprinted by permission.