Robotic Fish Have the Potential of Reducing Invasive Freshwater Species

Engineers and researchers have created a robotic fish designed to protect freshwater species from invasive mosquitofish.

Read our latest post to learn about efforts to use robotic fish to protect freshwater fish from invasive species. 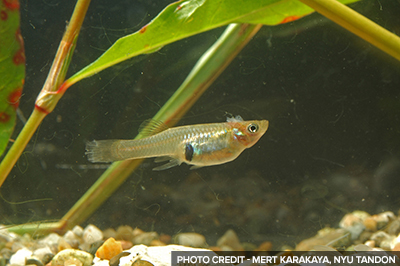 In lakes and rivers where invasive fish species threaten native populations, the next fish to be stocked may be robotic. Attempts to control invaders with toxicants or traps often fail. But, robotic fish may be able to achieve what other methods have not been able to accomplish. They may be among the first, but not the last, robots to control pests in the wild.

The mosquitofish, unsurprisingly, is a nuisance and threat. It is likely the most widespread freshwater fish in the world and can be found across North America from Illinois to as far south as Mexico. It was introduced in many areas to consume mosquito larvae; however, they aggressively wrecked native fish populations in their quest to reduce the mosquito populations.

The robotic fish’s duty is to stress out the mosquitofish, thus denying them the opportunity to breed. As a result, researchers hope the mosquitofish will be less of a problem for native, and especially endangered, native species. The plan is for mosquitofish to reproduce less and for their population to decrease over time in those bodies of water where they shouldn’t be in the first place.

How the Robotic Fish Works

During research, the fish-shaped robot was controlled by a rod extending from the bottom of a fish tank. A computer used a camera to guide the robot. Researchers varied the behavior of the robotic fish. Sometimes it swam at a constant speed, and other times it varied its speed. Scientists used their study of juvenile bass to create lifelike movements. They even had the robotic fish mimic attacks against the mosquitofish.

Scientists recorded mosquitofish behavior and were especially interested in actions associated with fear. Mosquitofish exposed to the robotic bass lost weight, which suggests they were experiencing significant stress. Fish with lower fat reserves are less likely to reproduce or survive in their environment.

Lab experiments have shown that real fish can be encouraged to follow robotic fish. In the future, scientists hope to use the technology not just to save populations from invasive species, but to help lead schools of fish away from pollution, oil spills, and other dangers.

You may also be interested in 3D Printed Robot: Miniaturization to Microscopic Scales.