NASA is looking into using collaborative robots for future missions to Saturn.

Collaborative robots are so versatile they're even being used for exploring deep into our solar system, as far as Saturn! 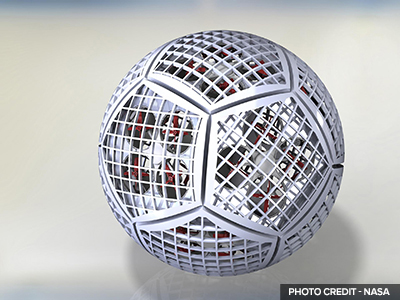 The shape-shifting cobot may replace the rover when NASA sends its next mission to Titan. Although NASA’s rovers have had a pretty good track record, the agency thinks that a collaborative robot capable of morphing into multiple configurations may be better suited to explore Saturn’s largest moon.

Titan is unlike any environment that NASA has explored with robotics in the past. They have to build a robot that can endure Titan’s frigid temperatures, ice volcano eruptions, methane lakes, and hydrocarbon rain. Their solution is to build 12 mini, 3D-printed, collaborative robots that can fly, swim, and boldly go where no robot has gone before.

NASA is programming the cobots to be able to join up automatically without the need for a command from Earth. They would gather into a rolling sphere to travel ground distances quickly. They could even daisy-chain themselves together to explore into deep caves and caverns.

Each cobot would have a propeller and would be able to fly or navigate Titan’s lakes or oceans on its own. Alone, the prototype looks like a drone encased in an elongated hamster wheel. The cobot can even split into two flying drones for aerial exploration. Fortunately, the atmosphere is dense and the gravity is low on Titan, making for easier flight.

The Cassini mission taught scientists a lot about the surface and atmosphere of Titan. It flew by Titan over 100 times and mapped the moon’s surface for future missions. Surprisingly, Cassini found that Titan is not entirely different than Earth, a fact that has bolstered NASA’s desire to find out more about Saturn’s moons.

Titan’s deep lakes of methane and ethane and hazy atmosphere with volcanoes that erupt water or ammonia may suggest that the moon has what it takes to create life. Unfortunately, because of the hazy skies, NASA was not able to figure out much about the composition of the surface. So, they had to come up with a design that can be transported on a rocket but can also navigate almost any terrain imaginable.

In the future, NASA could even send a mothercraft to Titan’s surface that could power the cobots and transmit additional scientific instruments. The cobots could even come together to relocate the mothercraft lander when needed. The current design is semi-autonomous, but NASA hopes to create a future design that can act on its own.

Watch our free Collaborative Robot Stories webinar to learn about both unique and typical applications of collaborative robots.

Find out where the 2020 RIA Collaborative Robot Safety Training seminars are scheduled to take place and register to attend.