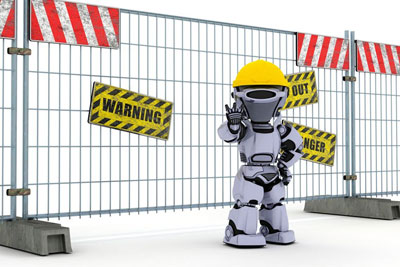 One of the best things about robots is their ability to do jobs that would be just plain dangerous for people. Not only can robots operate in environments where humans can’t, but they can also take on challenges that are hazardous.

Robots can explore beneath the sea, investigate volcanoes, and much more. In many cases, however, they are simply taking over jobs that are tedious and have a low margin for error. That makes things a lot easier on their human counterparts!

Let’s look at some examples:

Welding is a very important part of all kinds of heavy manufacturing environments. Unfortunately, a single moment of inattention can spell disaster for a human welder. Not only must they be very skilled and precise, but mistakes can cause a lot of waste. With robots, the hazard is eliminated – noise, intense heat, and toxic fumes are no problem. Plus, robots can switch from one project to another more quickly than people.

Deep sea exploration is fascinating, but dangerous. Even divers with modern equipment and years of experience can succumb to various hazards of the deep, including sea predators and pressure sickness. Stanford recently announced the development of an undersea exploration robot capable of rudimentary planning in unpredictable environments. That’s a step beyond the average robot, which works best in controlled environments.

Government agencies and private companies are testing new ideas for space exploration as bigger, more ambitious journeys become possible. In 2011, the Robonaut 2 became the first humanoid robot to make it to the International Space Station. Since then, the Valkyrie – “Robonaut 5” – has been developed. At 6 feet tall and nearly 300 pounds, the new design features sophisticated hands for tool manipulation. Its ultimate intended destination? Mars.

Robots have been tested for a wide range of emergency response applications, including dealing with wildfires, floods, and other situations. One of the most promising developments comes from Sandia National Laboratories. It recently released information about using “robotic swarm” technology for avalanche rescue. This would be an especially valuable application for robotics, since avalanche victims may die in as little as 30 minutes.

With time, robots are sure to enter more and more situations that would be potentially lethal to humans. With ever-improving maneuverability and adaptability, robots make the perfect partner for any kind of exploration or risk-intensive rescue mission.