Unlike other kinds of light, X-ray pulses produced by XFELs are short and intense enough to allow visual observation of the movement of atoms and molecules.

Unlike other kinds of light, X-ray pulses produced by XFELs are short and intense enough to allow visual observation of the movement of atoms and molecules.

In XFELs, an injector with a radio frequency (RF) photocathode emits a beam to knock electrons out of a piece of copper. Pulses of these relativistic electrons traverse a matching RF chamber and then a compressor, which forces the electrons into standing waves, forming microbunches. These bunches then travel through an accelerator and a magnet-studded undulator, and their snaking, field-slaloming path induces high-intensity, ultra-short X-ray energy emissions. It’s here that the desired end product of electromagnetic energy in the form of X-rays is extracted. What’s more, the resulting X-ray waves are superimposed (and made coherent) to reinforce each other and to cause an exponential rise in radiation intensity.

The extremely short and intense flashes of X-ray light from XFELs are helping researchers investigate chemical and biological processes that were once too fast to study.

At the SwissFEL facility, electrons undergo initial acceleration followed by a trip through a 400 meter accelerator for further energy magnification. Electron bunches are again longitudinally compressed; magnets send leading electrons on a long path and trailing electrons on a short path so that all concurrently arrive at their destination within 1x10?¹? seconds. After additional processing, the slaloming electrons’ X-ray pulse output travels onward to the station housing the experiment’s equipment. 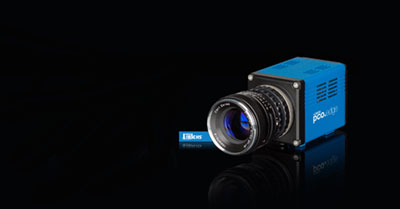 For the field of medicine, the Paul Scherrer XFEL allows nondestructive imaging of proteins at the atomic level to facilitate development of drugs engineered to interact with these proteins very precisely. The XFEL is also informing materials researchers on how molecules behave in superconductors, topological insulators, and quantum spin liquids and in other substances during chemical reactions.

To ensure that electron-beam bunches satisfy experiments’ exacting specifications, more than two dozen beam profile imagers are installed at the SwissFEL facility. One is a scientific complementary metal-oxide semiconductor (sCMOS) camera supplied by Excelitas PCO GmbH. This pco.edge 5.5 CLHS camera uses a low-noise sensor and real-time CLHS output connection to yield exceptional imagery of the electron beams — even to 100 fps.

More specifically, the pco.edge 5.5 CLHS camera monitors the electron beam pulses’ spectral profiles at given wavelengths as well as beam energy distributions in SwissFEL’s injector and undulator. Employing a 300 mm lens, the sCMOS camera can image beam profiles with a projected pixel size of 0.04 mm. As this imaging doesn’t interfere with SwissFEL operation, it’s used for routine monitoring and optimization of beam energy, energy propagation, and beam compression. 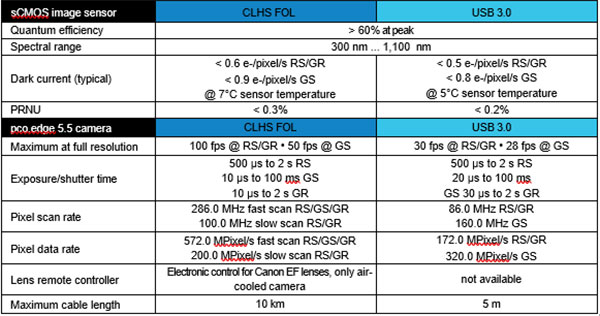 Here, CLHS provides low-latency real-time transmission of control data, triggers, and collected data between the camera and its frame grabber on a PC. The camera’s use of CLHS allows for long cable lengths between the camera and PC, with transmission rates maintained to 1.2 Gbps over many meters (potentially up to 10 kilometers). The CLHS X Protocol (which delivers bit rates beyond 10 Gbps with 64b/66b line encoding as defined by IEEE 802.3) compensates for trigger-command delays and prevents (or renders negligible) any cable-related jitter. CLHS’s networking-standard hardware is cost-effective, and the standard complies with the European Machine Vision Association GenICam programming specification. Forward error correction (through transmission of redundant data) lets CLHS continually check and correct for any error bursts to 11 bits. Perhaps most importantly, the fiber optic CLHS connections neither emit nor are affected by electromagnetic interference — essential for use in the exacting research setting of SwissFEL.

>>>Get the full details on how SwissFEL works here.

>>>Reach out with any questions by emailing Bob McCurrach here.